Why Fragments of Gold 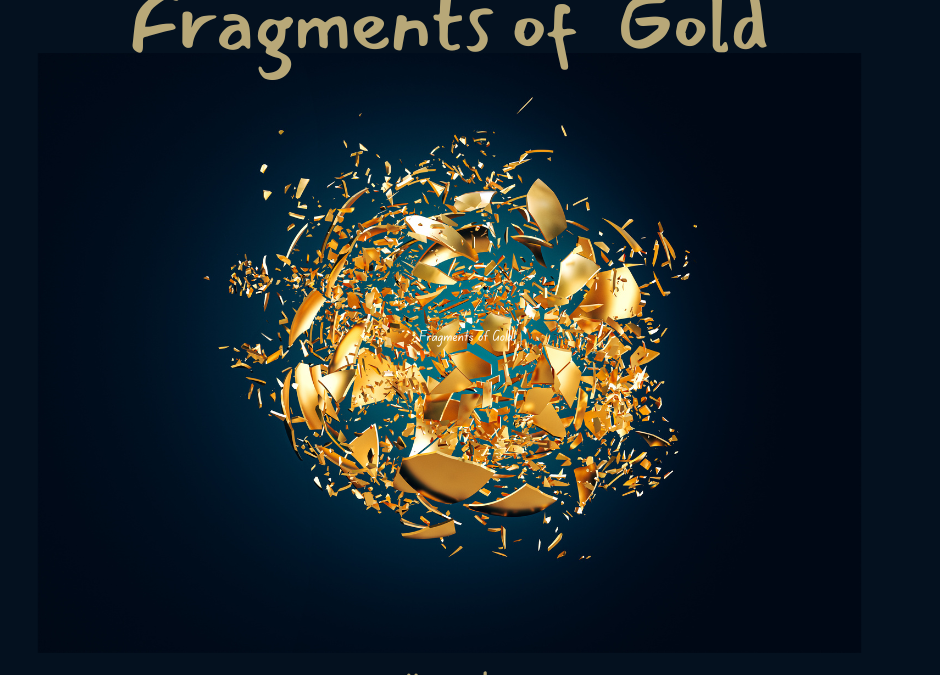 As many of you know Gold is one of my “Things” my passion and what an amazing journey I have had with Gold! If you have been around for a while you probably know this but I completely get that many folks here will not know how I got to be so passionate about this amazing element.

Gold has been on my radar since around 2000 or so – consciously that is and it’s hard to say exactly how it piqued my interest in the first place but wiggling it’s way in it definitely got my attention!

I began having weird interactions with Gold via meditation around 2009/10 and my Egyptian interest coupled with curiosity opened up a bit of a weird one with bi – location, Mono atomic gold and ongoing insights into just what Gold could bring to me on an energetic level.

The insights came and went as did the practice but each time I revisited the journey it gifted me something more in-depth and intriguing than the last one.

So the notion of Fragments of Gold was in essence born around 2011 but it was little more than a self-exploration practice that was developing for me.

Now I can be a bit slow and obstinate and unless synchronicities are bountiful and kind of wave wiggle themselves in my face introducing themselves  I can dig my heels in – waiting for ” higher confirmation” that I am indeed on the right track. ( thankfully I’m getting better at listening!)

That higher confirmation came in the rather unusual format of a musical event that was to be held in Glasgow Cathedral – this was to be held on 30th August 2014.

The event only caught my eye as it was called “Fragments of Gold”  – I hummed and hawed over whether I should go or not – bought a ticket and still couldn’t make my mind up.

It was some classical composition composed by DJ Goldie – who was a complete unknown to me – after a Google search finding out that he is big in the Drum and Base music field which was definitely NOT my thing!

There was that little itch at my brain that tweaking of the Golden threads that I couldn’t help notice – Fragments of Gold – Goldie with his gold capped teeth – to perform an ancient classical piece in the sacred space of Glasgow Cathedral which is a known node on the Glasgow Network of aligned sites ( ley lines and sacred sites were another of my passions!)

Then things started to get a little weird – it took me ages to share this as it feels a bit egotistical – and yet it feels so synchronistically aligned.

It was, in my mind overtly egotistical and I couldn’t think for the life of me why I would even want to connect with a gold toothed – wild – drum and base guy!

Yet the fragments of Gold kept swirling in my awareness   , I gave in and decided to go anyway – it wasn’t going to be a long event  so what was there to lose? Not to mention I might get a bit of peace from the crazy dreams!

On the night I was still not feeling the vibe –  so kicked on a comfy pair of Jeans and a top threw an old cardi on just incase it rained – and a comfy pair of trainers as it was a bit of a hike to the cathedral.

carefully  arranged pendulums swish to and fro over blocks that resembled white Piano keys – a friendly sort of guy sat next to me and struck up a conversation- which to be frank bored me really quickly as it was pulling my attention from the vibe that was in the room – so polite hmm’s and occasional nodding was my mode.

Suddenly a ripple went round the room and this unrecognisable guy walked down the nearby aisle.  The guy next to me informed me “there he is” so I presumed he meant Goldie – he looked nothing like the kind of menacing photos from his acting roles that I’d seen on the internet – thankfully!

Then all of a sudden he broke into a run and bounced right over to me – gave me the mother of all bear hugs – said “you look like you need a hug “ and then bounced off into the throng of people again!

The hug was remarkable not a superficial type one but a strong heart connected one – and definitely not the kind I would expect from a stranger – Let alone a celebrity one!

The event was amazing and to listen to how Goldie channeled the music – getting up in the night to compose having no notion of exactly how it had arrived – just that that’s the way it happens!

The music was filtered to perfection as the acoustics of the cathedral carried it in its fullness and it was certainly a worthwhile experience however the validations of Fragments of Gold was enough to spur me on to taking the journey to a whole new level – Gold insights often arrive in the middle of the night so capturing the fullness of this can take time and effort, but it’s literally worth its weight in Gold !

So this is how my signature programme came to its title of Fragments of Gold – a phenomenal experience and yet it still took time for more of the components to filter through – I offered my first “Fragments of Gold” journey back in 2019 and have been running these via short journeys regularly since then.

There is another shift in this work coming and a deepening of those Fragments of Gold and I will be announcing this soon – Autumn 2022.